The Remarkable Research on Cinnamon 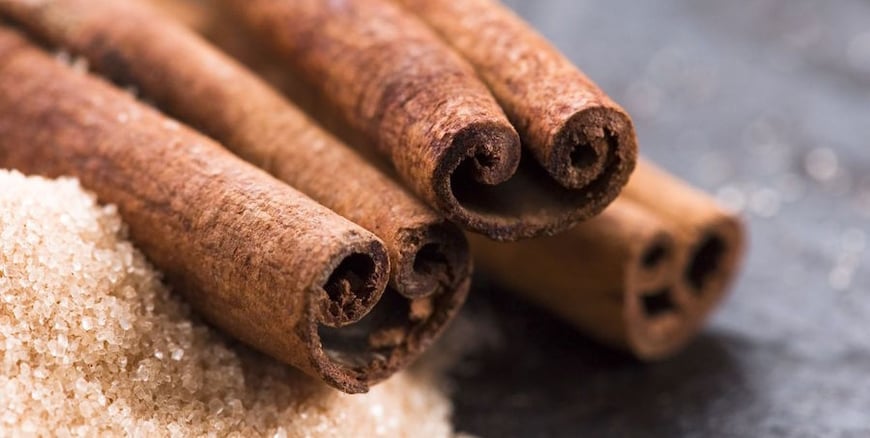 The Remarkable Research on Cinnamon

Sprinkled on oatmeal, steamed rice, yogurt, or your morning latte, cinnamon makes a fabulous breakfast topping. Many of us have childhood memories of grandma baking apples with cinnamon and brown sugar or cinnamon rolls with raisins. It’s a staple spice of the fall season!

Aside from its culinary flair, research shows that cinnamon Cinnamomum zeylanicum (Blume) has therapeutic properties. Let’s explore the research!

Does Cinnamon Have Antifungal Properties?

An interesting 2012 study investigated cinnamon oil and patchouli Pogostemon cablin (Benth.) oil and their effects on three strains of candida in the intestines: Candida albicans, Candida tropicalis, and Candida krusei.

Sixty patients with intestinal infections caused by candida were given a capsule that contained cinnamon and patchouli oil. Among the subjects studied, there was a 71.67% rate of cure (meaning the fungus was eliminated). There was a 28.33% rate of reduction of the fungus, meaning the fungus was greatly reduced but not eliminated. The researchers concluded that the oils had strong anti-fungal properties against various species of candida.[1]

Like many people, I’ve lost loved ones to Alzheimer’s disease. I know how awful it can be for people you love to forget who you are. Any positive research, even a little, is welcomed news.

However, finding natural ways to support these patients is often difficult. In a study published in the Journal of Neuroimmune Pharmacology (2014), researchers found that cinnamon can reverse some of the anatomical and cellular changes that are in the brains of mice with Parkinson’s disease. The feeding of ground cinnamon to the mice improved their motor functions. This could potentially be a wonderful advance in support these patients, and further research is needed.[2]

An interesting study was done in 2009 using cinnamon extract. The extract was used in an in vitro study of tau aggregation (clumps of protein) that is associated with Alzheimer’s. The results of the study showed that cinnamon extract inhibited the activity of the tau filaments (tangles of a kind of protein found in the brains of Alzheimer’s patients) that are characteristic of Alzheimer’s disease. The researchers concluded that compounds in cinnamon could be beneficial to people with Alzheimer’s, though more research is needed to discover the mechanisms through which it works.[3]

A study was done of the aldehydic content of cinnamon bark extract. Results of the study showed that cinnamaldehyde and 2-methoxycinnamaldehyde were active substances that reduced osteoclast-like formation. The study showed that the breakdown of bone was slowed down.(4) These results open up possibilities of ways to support these patients and keep bones healthy before its onset.

Can Cinnamon Be a Food Preservative?

Cinnamon has been used as a preservative for centuries. From cosmetics to meat, it’s an effective natural alternative (plus, we already know it tastes great!). Cinnamomum zeylanicum was one of several extracts studied for antimicrobial activity. The extracts were tested against Pseudomonas aeruginosa and Escherichia coli, Staphylococcus aureus, and Candida albicans. The results showed that the extracts and essential oils could replace the use of methylparaben and preserve the microbiological purity of cosmetics. (5)

Can Cinnamon Promote a Healthy Metabolism?

We often associate cinnamon with calorie-filled cakes and desserts, but modern folklore tells us that honey and cinnamon can be used in the daily diet to invigorate the metabolism and promote a healthy weight. Of course, more research is needed to determine these therapeutic properties. A popular way of taking honey and cinnamon is in a tea taken twice a day. The tea is taken in the morning on an empty stomach and in the evening just before bed. (6)

Remember, many herbs don’t mix well with medications. Be sure to discuss any herbal preparation you want to take with your healthcare provider.

(6) Morris, SY. (2015). "Can You Really Use Honey and Cinnamon for Weight Loss?" Healthline. Retrieved from: http://www.healthline.com/health/honey-and-cinnamon-for-weight-loss#1

Disclosure of Material Connection: I am a graduate of American College of Healthcare Sciences, the Institution that publishes this blog. However, all opinions are my own. This blog may contain affiliate links. I am disclosing this in accordance with the Federal Trade Commission’s 16 CFR, Part 255: “Guides Concerning the Use of Endorsements and Testimonials in Advertising.”

Valerie graduated from ACHS in 2014 with a Diploma and Herbal Studies (Master Herbalist) as well as a Certificate in Herbal Retail Management. Valerie worked for twelve years in mental health, but by middle age, she became burned out and was looking for a different line of work. She was feeling run down, and started experimenting with herbal teas and natural remedies. She found a great deal of relief and began investigating anything that was related to alternative medicine. This interest eventually led her to the American College of Health Care Sciences (ACHS). Upon receiving her credentials in June of 2014, she began writing a blog called Simple Ways to Stay Healthy. Valerie has a passion for good health and sharing information about how to get and stay healthy. She wants to continue writing blogs and books to educate folks about the wonderful ways to get healthy and stay healthy.