Pronounced “keen-wa”, quinoa is one of our favorite superfoods in holistic nutrition. In fact, a student recently commented to me that she felt like her Nat 101 instructor was obsessed with quinoa, answering many of her questions with this one food! “It's like it’s the only food she knows,” she grumbled. “Hmmm… What questions were you asking her?” I inquired. “How can I get more protein in my vegan diet?” “What’s as fast to cook as pasta but is low Glycemic Index?” “How can I make my famous orzo salad low carb?” “What one food would you take to a desert island?” she rattled off…

Well, I can see why her instructor was giving her the same answer to all these questions! Quinoa is an amazing seed from the plant Chenopodium quinoa. It has been eaten since the Incans, for thousands of years. It is native to the mountains and valleys of Peru, Bolivia, Ecuador, and Chile, and is often called Incan rice or vegetable caviar. Interestingly, it is closely related to common lambs quarters Chenopodium album, which is also edible, although we don’t usually harvest the seed, instead eating the young leaves in salads.

While quinoa is a low carb seed, and is gluten-free, it acts like a grain in the diet, so it’s a great way to cut carbs and lower or avoid gluten. It is often called a pseudo-cereal, similar to buckwheat and amaranth. It is also the only vegan food that contains all the essential fatty acids that make up a complete protein. So no need to mess about with protein combining or argue with grandma whether you need to eat more beef!

The Food and Agriculture Organization (FAO) of the United Nations compares the nutritional quality of quinoa to dried whole milk[1]. Now that’s praise indeed from the dairy pushing FAO. In fact, the FAO are so enamored of quinoa, it named 2013 the International Year of Quinoa and declared “Quinoa can play an important role in eradicating hunger, malnutrition and poverty”[2].

One of the reasons quinoa holds such promise is its ability to grow on otherwise marginal land for agriculture, including high altitude, drought-prone land with low soil fertility[3]. It tolerates wide ranges of soil acidity, but it requires cooler temperatures to germinate and set seed, and does best at high elevations (7,000-10,000 ft in experiments in Colorado)[4].

According to the USDA nutrient database[5], just one cup of cooked quinoa contains 8.14 grams of protein, 5.2 grams of fiber, just 1.61 grams of sugars, and is 222 calories. It also contains:

Not too shabby for a seed that was nearly extinct! Thank goodness a few small villages saved seeds and kept this amazing plant around for us all to benefit from today!

When buying quinoa, choose organic and fair trade if you can. I’ve heard some horror stories about small villages being exploited. ABC news recently highlighted some of the issues, which include local Andeans substituting their traditional quinoa-rich diet with Western-processed food[6]. Journalists argue whether this is due to increased prices for quinoa locally or because increased cashflow from quinoa sales gives Andeans more choices. Either way, it’s a sad outcome that could be addressed with education. Perhaps it's time for bottles of Coca Cola to come with an FAO warning or share some pictures of obese American’s with diabetes, much like we do with cigarettes. Interestingly, the UN FAO reports that domestic consumption of quinoa in Bolivia is up threefold in the past four years[7]. So, perhaps concerns about displacement of the traditional diet are overstated. But, I digress.

Another issue is that of any industrialized agricultural system – as one crop becomes more popular, other crops are displaced, creating a monoculture that increases problems with plant diseases, weeds, and reduction in sustainable soil management techniques like crop rotation. It’s a bit like what’s happened with corn production in the U.S., leading to the dustbowls of the Midwest and F1 GMO corn. Lets hope we never see roundup ready quinoa. Gag.

In addition, agriculture in the Andes, like any sustainable agricultural system, needs animals to provide fertilizer. I make compost for my lavender farm with manure from two horses, a pony, chickens, and an alpaca and I never have to buy fertilizer! ABC News[8], along with CBS[9], reports that llamas, the most common animal in the Andes and an important source of manure for fertilizer, are being displaced by quinoa crops. This then necessitates bringing in chemical fertilizers to replace the llama manure. What to do? Educate farmers on the importance of sustainable practices. Again, cautionary pictures of the Midwest dustbowls may be in order! But also, find a way to limit the predatory behavior of industrial agricultural suppliers and preserve traditional sustainable agricultural methods. Luckily, action is already being taken, with Bolivia's National Association of Quinoa Producers reporting to CBS News that they will not work with producers who don’t follow traditional farming methods that preserve soil fertility through rotation[10].

The ultimate solution? Let's face it, money talks. So as consumers, commit to buying fair trade sustainably grown quinoa crops. Let's also look at ways to grow quinoa locally in high elevation, low fertility soils. There are farms in Colorado and Minnesota already, so buy locally when you can.

Oh, and what about the student who got me thinking about why quinoa is such a fantastic food for holistic nutrition and a key player in a healthy balanced diet? Just yesterday she shared with me a new recipe for broccoli quinoa soup! I think she's a convert! Maybe she''ll share it with us in the comments section!

First, it's super easy. If you can make rice or pasta, you can cook quinoa! And it’s a lot faster than brown rice.

Use it in place of rice, pasta, potatoes, or your usual carbohydrate, or try our favorite recipes below. 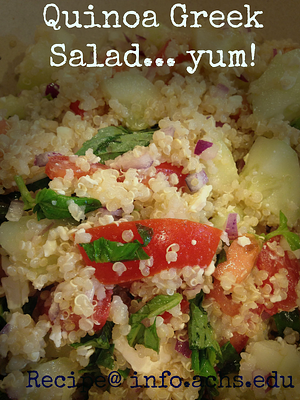 Toss with dressing made with 2 tablespoons olive oil, 2 tablespoons fresh-squeezed organic lemon juice, zested rind of one organic lemon, and two cloves of organic garlic, crushed. If you like to mix it up, you can add finely cut mint, basil, and onion as well.

Leave a comment and tell us your favorite way to prepare quinoa!