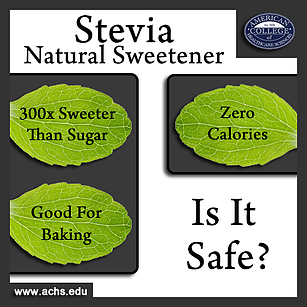 Was quitting sugar one of your New Year’s resolutions? Well, ABC News recently published quite a few good reasons why kicking the sweet stuff is a resolution worth keeping, such as accelerating the aging process, fattening your liver, and five more cringe-worthy reasons.[1] One sweet substitute that is growing in popularity in both the mainstream and integrative health communities is Stevia. But the question remains: is Stevia safe? ACHS instructor Eleni Delfakis, MS, RDN is ready to clear up confusion and give you the low-down on the sweetener Stevia.

I’m so inspired that our ACHS faculty is continually conducting new research and sending out helpful information about holistic health and nutrition to the general public! The following article is from the new edition of Eleni Delfakis’s book, which is due to be published this year. Enjoy!

Natural and artificial sweeteners are widely used in processed foods and beverages. Artificial sweeteners are used to substitute table sugar or other calorie dense sweeteners like honey and maple syrup. Look closely at the ingredient list on the label of processed foods such as baked goods, soft drinks, powdered drink mixes, sugar free candy bars, protein bars, canned foods, dairy products, jams, jellies, sauces, salad dressings, and many other food products; they all contain some form of sugar.

There are two main reasons people find artificial sweeteners: weight management and blood glucose control. However, critics blame artificial sweeteners for many health problems including cancer. Today, there is a relatively new natural sweetener making headlines; it is called Stevia, but goes by many other brand names such as Stevia in the Raw, Steviva, Truvia, PureVia, and SweetLeaf. It is a naturally sweet alternative with virtually zero calories derived from a perennial shrub that is native to Brazil and Paraguay. It has been used as a sugar substitute in South America, China, and Japan since the 1970's, and more recently approved in Europe and Australia.

Stevia's sweet taste is derived by isolating eight seviol glycosides, with the most potent concentration being a stevioside. This stevioside is near 300 times sweeter than table sugar, but in high concentrations it has a bitter aftertaste.  Whole leaf stevia contains some minerals: iron, zinc, potassium, phosphorus, and calcium. And according to the American Diabetes Association, stevia sweeteners do not appear to have a significant effect on blood glucose levels and may be a good sugar alternative for people with Type 2 diabetes who want to decrease the calorie intake and still enjoy an occasional dessert. As to the claims that Stevia helps control blood glucose and weight, any time you lower the total calories consumed by eating small portions, it also lowers the effect on blood glucose. Another claim is that Stevia is an ideal sweetener because it can be heated without breaking down which would make it ideal for baking. But unlike sugar, baked goods made with Stevia do not have a desirable body and texture. Furthermore, Stevia is very expensive as compared to honey and cane sugar.

Is Stevia approved by the FDA?

In the early 1990s the Food and Drug Administration (FDA) stated that there was no solid evidence that Stevia offered any health benefits and banned Stevia from being sold in the U.S. due to lack of evidence to support safety. After partial FDA approval to sell Stevia under the Dietary Supplement Health Act in 1994, the FDA approved only one highly purified component of Stevia (Rebaudioside A or Reb A) as a food additive in 2009 under the Generally Recognized As Safe (GRAS) label. This means that based on scientific evidence experts agreed that Stevia is safe and can be used to sweeten food products. However, in 2012 the FDA posted these comments on their website stating the following:

"FDA has not permitted the use of whole-leaf Stevia or crude Stevia extracts because these substances have not been approved for use as a food additive. FDA does not consider their use in food to be GRAS in light of reports in the literature that raise concerns about the use of these substances. Among these concerns are control of blood sugar and effects on the reproductive, cardiovascular, and renal systems. Food additives and GRAS affirmation petition or pre-petition submissions for the use of such substances that FDA has received in the past have not contained the data and information necessary to establish the safe use of these substances as ingredients in food."[2]

Regardless of the FDA statement, a new low-calorie beverage is on the way. Coca-Cola Life is a new soda sweetened with stevia, so it's naturally low in calories, has been a success in Argentina and could possibly be sold in the U.S. within a year.

Does this mean that Stevia is safe? I think it is too early for definitive conclusions. Unlike the Japanese and Chinese cultures, Americans tend to overindulge on processed foods, especially foods with labels stating "sugar free" or "fat free."  The question is, what happens when Stevia is an ingredient commonly used in all processed foods? What is the long-term safety? Is everything that is "natural" safe? The negative side-effects on human health may not be revealed for years, just as high-fructose corn syrup (HFCS) and aspartame were discovered to have unhealthy side-effects even after approved by the FDA. The natural sweeteners that are considered safe include fruit, fruit juice, fruit nectar, honey, maple, and molasses. These sweeteners have been used safely for thousands of years. White sugar from sugarcane dates back to 600 BC in New Guinea. Sugarcane plants were later cultivated in Southern Asia and India, and then westward to the Mediterranean region in Syria, Cyprus, Crete and Spain between 600-1400 AD.  Sugarcane has been mentioned by historians during the 5th century BC and Great Alexander sent sugarcane home from his travels to South Asia in 326 BC. These carbohydrate containing sweeteners have been around for a very long time and we did not have a problem until we started consuming processed foods and soft drinks with disregard for moderation.

As a dietitian and holistic nutritionist, I recommend reading the food labels carefully and decreasing all types of sugars from the daily diet, natural or artificial. To satisfy your craving for sweets, choose a fresh fruit, dry fruit, nuts, or yogurt, and try drinking your coffee or tea without any sweeteners. Too hard to do? Start using less sweetener and slowly decrease the amount until you don't crave the added sweetener. One of the best ways to reduce the craving is to eat three meals per day, so don't skip meals, and choose raw fruits and vegetables for between meal snacks.

Leave a comment and tell us your thoughts on Stevia!

[2] “Is Stevia an Approved Sweetener?” Retrieved from http://www.fda.gov/aboutfda/transparency/basics/ucm214864.htm

A kiwi and a recovering lawyer with a sassy sense of humor, Erika Yigzaw received her Primal Blueprint Expert Certification and developed a love for all things primal/paleo (especially dark chocolate!). She is a social media queen, lavender farmer, juicing junkie, kale pusher, beekeeper, and is just a wee bit obsessed with holistic nutrition. Her goal is to live green, making lifestyle and career choices that support sustainable health-conscious companies.