India Study Abroad: What Handmade Products are Made in India? 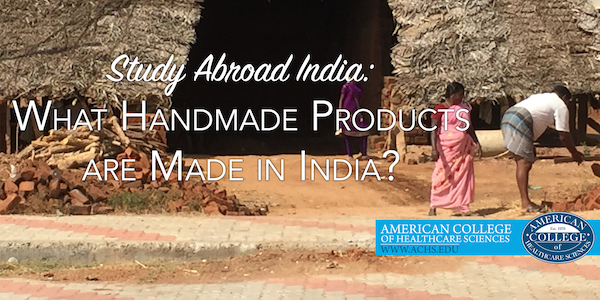 As we traveled from city to city, experiencing the nuances of each new village through the window of the car, I was struck by the disparity between how I usually spend my days and how many in India spend theirs. There is a basic level of living here, one that many of us in the U.S. rarely experience.

For example, family transportation can be one small motorcycle. And like a transformer, this small motorcycle will morph into a mini-van, carrying the entire family and groceries. Or, it might take a man and his several brass pots up the road or a fisherman and his huge catch. 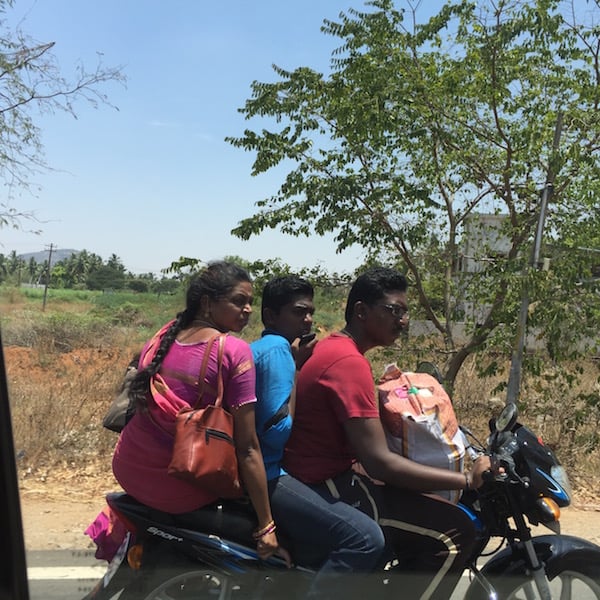 Similarly, gathering enough water for both drinking and washing clothes can be the main focus of a day. Like the T.V. character MacGyver, there is amazing resourcefulness in people who live with fewer resources. 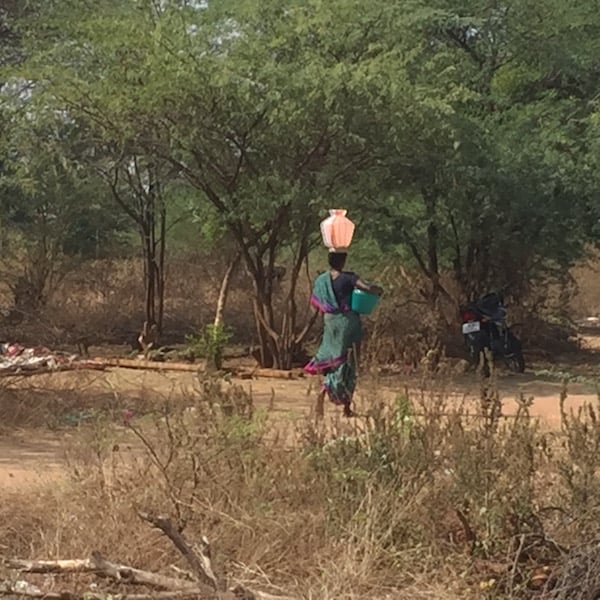 I immediately felt a renewed appreciation for what my 16 year-old son is learning at the polytechnic high school he attends. The emphasis on making things—manufacturing, construction, mechanics, engineering—brings a practical aspect to life. When I see the screwdriver or cutting board that he’s created, it feels comforting somehow. There is power in being able to say, “I made that.”

And, like my son, India is full of people who make things. But unlike my son, people in India are often relying on their creations to put food on the table.

On our way from the ancient city of Madurai to Cochin (Kochi) in coastal southwest India, we noticed, just off the main road, a triangular-shaped hut with stacks and stacks of red bricks drying in the sun. As we pulled up to snap a few pictures, the family of brick makers was eager for us to come and see what they were doing, so we exited the cool air conditioned car and stepped outside into the blazing heat.

Walking over to the open-air, thatch-roofed hut, we felt the movement of the hot breeze as it kicked up dust from the dry ground. Since the hut was open, there was minimal variation in temperature from inside to outside. Still, the dried bricks were placed inside, while those still drying were left off to the side, in the open air. It made me wonder how they managed things during the monsoon season.

The older of two females was wearing a striking, colorful sari and gestured for us to follow her to where she knelt beside a pile of red mud. In one hand she held a three-brick metal mold and with the other she scooped up the mud and placed it into the mold. The younger female, no more than 12 or 13 years old, poured a little water over it to help level off the open end of the mold. She then turned it upside down, adjacent to one of the columns drying in the sun. Looking up at us, her face was a mixture of satisfaction and, frankly, expectation. She was hoping we would pay them something for this demonstration, which we did because this is their livelihood. 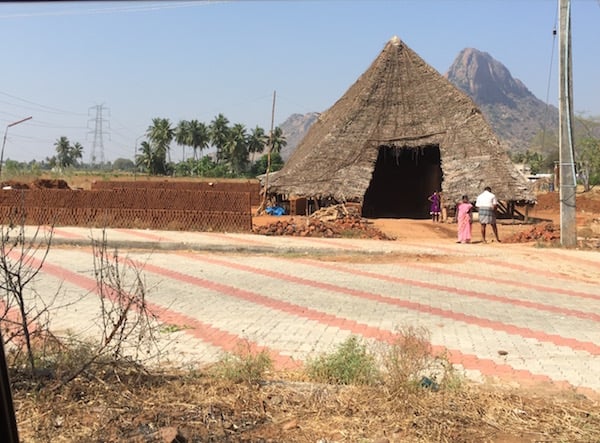 Incense is intricately woven into every aspect of Indian life. Eloquently described in Prabhuji’s Gifts blog, which has an extensive history of incense making on their website[1]:

Walking through an Indian village or town in the early morning or late afternoon, […] bells ring in every house while a multitude of incredible incense fragrances waft out of windows, blending together on the streets. This is the spiritual wonder that is India.

Incense is used for the meditative ritual called puja, the act of worship, believed to purify the mind and heart. Prabhuji’s blog goes on to say: “In recognition of the purifying and spiritual power inherent in smoke, [...] a thick paste was prepared and burned during the puja ceremony.”

We were scheduled to see a commercial incense factory where this product, held in such reverence by the Hindu people, is produced. Instead, we found ourselves weaving through the narrow city streets of Mysore, wondering if we had been led astray. It just didn’t seem like a factory would exist here, in the heart of the city.

It turned out that there had been some confusion with our guide. He had secured permission for us to visit the factory, but an hour before we were to visit, he called the factory to confirm and was told our access had since been denied. This, unfortunately, is very common in India. If the “right” person isn’t working that day, or if you speak to someone different than whom you spoke with yesterday, things may change very quickly.

You have to adopt an attitude of flexibility, which is what our guide had done. As it says in the Bhagavad Gita, a Hindu holy text: “The wise man lets go of all results, whether good or bad, and is focused on the action alone.”

So… our guide knew someone who could give us an incense demonstration, and while we weren’t able to visit the actual factory, his focus on the “action alone” landed us in front of a tiny home, greeted by a young man. We were ushered into the first tiny room where, sitting cross-legged on the floor, was our lone incense maker.

She could have been anywhere between 20 to 50 years old. She had a dirty face, dirty hands, and was working in front of a tiny table the size of a low stepping stool. She took a black, sticky paste and rolled it out over each small incense stick, which was then placed in an ever-growing pile. She worked quickly, her hands black from the paste, and we were in awe at how fast the pile grew. 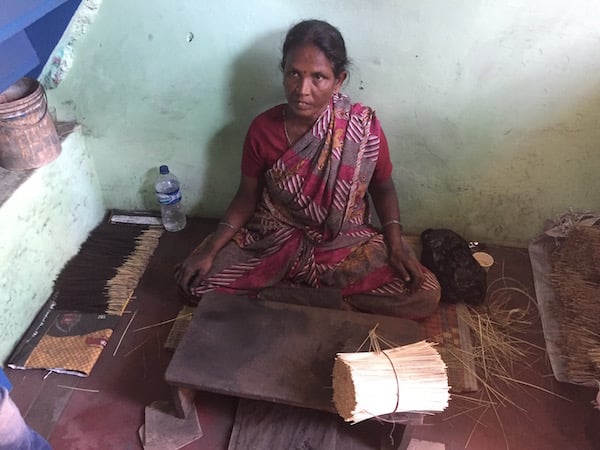 After watching our solo worker for a while, we were invited into a second, slightly larger room and offered a seat on the small couch. As tea was brought out to us, our guide’s friend proceeded tell us all about his “pure” essential oils in the hopes we’d make a purchase. Luckily, my traveling companion, Dorene, is an essential oil and aromatherapy expert. She subtly let me know that the product was not “top shelf,” and after listening to his entire spiel, we were able to gracefully make our exit.

Outside of Cochin, which has been a port town for centuries, is DEO Industries, a commercial, family owned essential oil distillery. Here we were treated to a small batch soap making demonstration. DEO does not produce soap for retail, but makes small batches for friends and family. We were honored to be considered friends, and our host, Adi, introduced us to two of his senior workers. 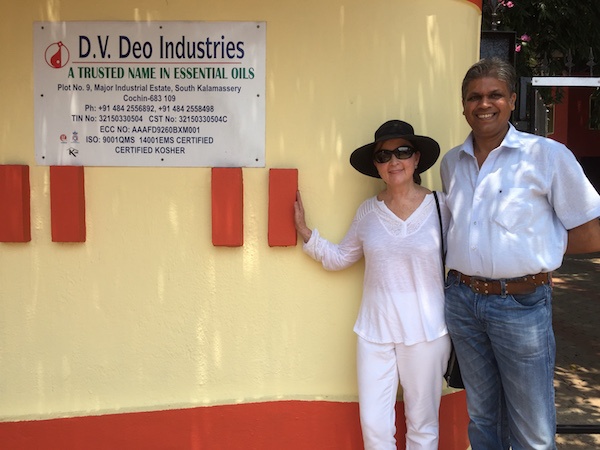 Like on an outdoor cooking show, the men worked over a small, two-burner stove that could be brought on a camping trip (if I camped, which I try to avoid). One of the burners heated liquid in a quart pan. On the other burner was a big spaghetti-sized bowl of water that was kept hot. One man, the more senior of the two, was ordained to work the wooden spoon and never stopped stirring the simmering liquid.

Little amounts of various ingredients were added, in a very specific way. The temperature was raised. The temperature was lowered. The stirring sped up at times and slowed down at other times. Some of the water from the larger pot was added. It was like watching cooking expert Bobby Flay whip up a sauce. Then the heat was turned down, and the senior soap maker raised the spoon out of the liquid, looking at the viscosity of his substance. When he was satisfied, the other soap maker secured a mold to a rack.

The mold, which reminded me of the cylinder shape of a Pillsbury Grand Cinnamon Roll container, was metal, and the liquid was poured into it. We were amazed to see that they had made exactly enough of the soap liquid to fill the mold. The soap was left to dry in the mold, after which it was removed and cut into bars. This soap had vetiver essential oil included, and it had an amazing fragrance.

Recipe for How to Make Soap

While we can’t make soap exactly like the skilled artisans at DEO Industries, there are many recipes available from natural products experts. If you want to try your hand at it, here is one of my favorites from Janice Cox’s book, Natural Beauty at Home[2]:

Heat the oils and/or fat slowly to approximately 80-85 F. Dissolve the lye in the water and cool to about 70-75º F. Add the lye solution into the oil mixture by pouring slowly in a thin, steady stream with slow, even stirring. You should not be applying any heat to the mixture at this time.

Slowly add the glycerin to the mixture and continue stirring until a thick, honey-like texture is obtained. This should take about 10 to 20 minutes.

(Note: If the soap mixture does not become thick within 30 minutes, and there is a greasy layer on top, it may be too warm. In this case, set the container in cool water and keep stirring from the sides and bottom. On the other hand, if the mixture is lumpy, it may be too cold. If this happens, set it in a pan of warm water and stir until the lumps disappear.)

Pour the thickened soap mixture into your molds. Cover and keep warm for at least 24 hours. When the soap is set, remove from the molds and cut into bars. Allow the soap to age for at least two weeks in a dry place.

What I Took Home From My Handmade in India Experience

I returned to my comfortable life in Portland, Oregon, with new appreciation. As I use soap in my shower, as I burn a fire in my brick fireplace, and as I burn incense in my home I give thanks for those who make these products that I take for granted. 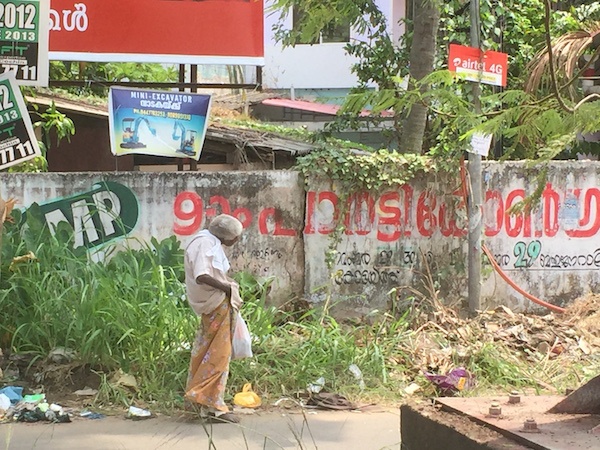 You, too, have the opportunity to experience first-hand how things are made in India. Travel with us from Bangalore to Cochin with our 2017 ACHS study abroad program, An Aromatic Journey Through Southern India: Silk, Spice, and Sandalwood. 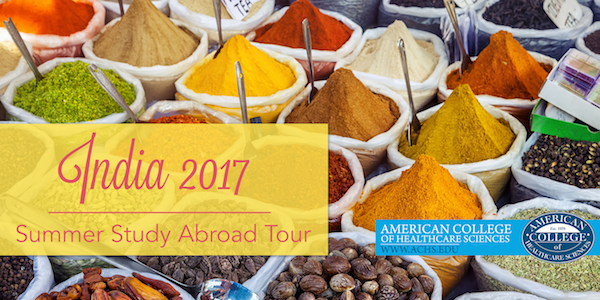 Disclosure of Material Connection: I am the Community Programs & Events Manager
at American College of Healthcare Sciences, the Institution that publishes this blog. However, all opinions are our own. If this blog contains affiliate links, they will be marked with an asterisk. I am disclosing this in accordance with the Federal Trade Commission’s 16 CFR, Part 255: “Guides Concerning the Use of Endorsements and Testimonials in Advertising.”

Stephanie is the Community Programs and Events Manager for ACHS. She produces the study abroad programs and runs the alumni-success coaching program. Stephanie loves to write about experiences that allow the reader to feel as if they were there. She is passionate about travel, music and helping people manifest their dreams. Her perfect day would be spent wandering around a foreign city, talking with locals and seeing the sights, followed by an evening of dancing to the music of the region.