GMOs and Pesticides: Why You Should Cook Organic 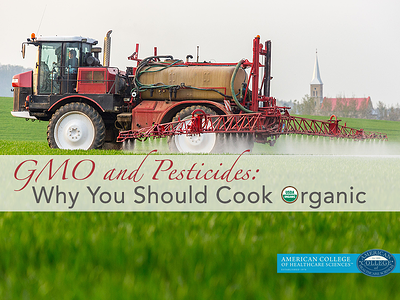 Have you read the web chatter surrounding the recent USDA approval of GMO “Arctic Apples”—apples that have been genetically modified to resist browning?[1]

When I read about these apples—set to hit shelves by 2017—I couldn’t help but hum the iconic Joni Mitchell lyric, “I don’t care about spots on my apples, leave me the birds and the bees, please.”[2] I’m very concerned about the presence of GMOs and pesticides in our produce.

In fact, I recently watched a video, How Cooking Can Change Your Life, from one of my favorite nutrition authors, Michael Pollan, and I was extremely disturbed. Pollan explains:

[McDonald’s] insist[s] that all their potatoes be russet Burbanks. And they further insist that they have no blemishes at all. […] You’ve seen potatoes with those little brown lines or spots that come through it—well McDonald’s won’t buy them if your potatoes have that. And the only way to eliminate that is to eliminate an aphid, and the only way to do that is with a pesticide called Monitor that is so toxic that the farmers […] won’t venture outside into their fields for five days after they spray. And then when they harvest their potatoes, they have to put them in these atmosphere-controlled sheds—the size of a football stadium. Because they’re not edible for six weeks. They have to off-gas all the chemicals in them.[3][4]

Is that food? Is that what you want to be eating? Gosh, Joni…I wonder what you might have to say about this. As for me, I’ll plead for spots on my potatoes if it means we can keep our precious birds and bees.

So how do we avoid GMOs and pesticides in our diet? Simple: eat and cook organic.

So eating organic keeps the nasties away. But are GMOs and pesticides really a health concern? What are the claims?

Let’s take a look at the evidence…

The Trouble with GMO

You might be wondering, what exactly IS a genetically modified organism? Essentially, the goal of genetic modification is to introduce favorable characteristics such as making a crop more resistant to abiotic stresses or even more nutritious. However, one specific application of genetic modification is to make crops more resistant to pesticides. These crops “have had foreign genes inserted into their DNA, usually from bacteria or viruses, to confer a particular trait. […] [Major commercial GM foods] are engineered to be herbicide tolerant, i.e. to survive spray applications of weed killer.”[7] In short, most GMO crops are designed to withstand powerful doses of chemicals. So when you’re eating GM foods, you’re most likely getting a heaping helping of Roundup (or some other pesticide) with your meal.

The concern about the effect of GMOs on our health is so pervasive that Vermont recently signed a GMO labeling bill into law.[8]

Many other states, including Oregon and Washington, have pushed for similar GMO “Right to Know” initiatives.[9] On a global level, there are 64 countries that require mandatory labeling of genetically engineered (GE) foods.[10]

But are there actual health effects?

As of right now, scientific studies haven’t been able to conclusively show the negative effects of GMOs on our health.

If you are interested in reading a thorough analysis of the data and scientific studies surrounding GMOs, Angelika Hillbeck does an excellent job of breaking down the evidence used on both sides of the GMO debate, and I encourage you to read her article in The Ecologist website here.

While the scientific community has not reached a consensus on the safety of GMOs, there is a compelling argument surrounding GMOs and the rise in gluten allergies and sensitivities.

Increase in gluten sensitivity: Are GMOs to blame?

In his article Can Genetically Engineered Foods Explain the Exploding Gluten Sensitivity?, Jeffrey M. Smith theorizes that “one significant addition to the American diet—genetically modified (GM) food—is a major contributor to gluten sensitivity reactions, and also interferes with complete and rapid recovery.”[11]

Smith notes that, based on animal feeding research, GMOs could be to blame for other issues with the gut as well, such as immune/allergic response, gut bacteria dysbiosis (pathogenic microbe overgrowth), impaired digestive capacity, and leaky gut syndrome.

Many of those diagnosed with celiac also have leaky gut, and as Smith mentions, anyone who ingests gluten is possibly susceptible to increased intestinal permeability (a porous or “leaky” intestinal lining).

Smith theorizes that there is a connection between these small “holes” in the gut and GM corn, which is designed to produce Bt-toxin. Bt-toxin is intended to open small pores in the digestive track cells of unwanted insects and kill them. Of course, this Bt-toxin is not intended to poke holes in human cells. However, Smith points to research that suggests that it can. He explains that the assumption that Bt-toxin has no effect on humans or mammals was contradicted by peer-reviewed studies.

The study most clearly related to the risk of leaky gut was published in February 2012.[12] Researchers ‘documented that modified Bt toxins [from GM plants] are not inert on human cells, but can exert toxicity.’ In concentrations that are generally higher than that produced in average Bt corn, Bt-toxin disrupts the membrane in just 24 hours, causing fluid to leak. The authors note, ‘This may be due to pore formation like in insect cells.’ Thus, the main assumption used as the excuse to allow pesticide-producing corn into our diet appears to be totally false. Bt-toxin does interact with human cells and may be boring small holes in our intestinal walls.[13]

I encourage you to read Smith’s full article on the connection between gut health and GMOs here. While the correlation between GMOs and our health is a hotly debated subject within the health community, personally, I would suggest avoiding them by choosing organic.

Time and again, pesticides have been shown to have severe adverse health effects. It makes one wonder how they are still legal while viable alternatives exist.

Pesticides have been linked to cancer as well as other adverse effects on the eyes, skin, nervous system, endocrine system.[14]

Not only are pesticides harmful to our human bodies, but they are also wreaking havoc on our friends in the animal kingdom. We’ve long known that pesticides may be playing a roll in honey bee colony collapse disorder (CCD).[15] I also recently learned that one of the most commonly used insecticides in the world, neonicotinoid, could be harmful to butterflies, ladybugs, and other important insects.[16]

Are we really so concerned about spotless apples, potatoes, and garden flowers that we’re willing to sacrifice the health of our planet?

What is Organic and Why Does it Matter?

Organic is a term defined and controlled by the United States Department of Agriculture (USDA). The USDA Organic seal was first introduced in late 2002, allowing consumers to choose fruits, veggies, dairy, and meat produced without pesticides, genetic engineering, growth hormones, or irradiation.

To qualify for an organic seal, farmers must adhere to the strict USDA rules for how animals are raised, how crops are planted and grown, and how waste is treated. The organic methods encourage sustainable farming, soil conservation, and also biodiversity. When raising farm animals, they are to be outdoors as much as possible with ample access to pasture.

Look for the USDA Organic Seal

The Organic Seal (pictured to the right) assures that the product has been certified by a USDA accredited certification agency (such as Oregon Tilth). If a product is marked knowingly with an organic claim and is not produced and handled according to USDA standards and regulations, the company could be slapped with a hefty civic penalty up to $10,000.

However, it’s important to note that it’s expensive to become certified organic. This creates a problem for small farmers who still adhere to organic methods. It’s possible to verify organic practices at your small, local farms. It’s important to know where our food comes from, and I suggest visiting your local farms anyway—you’ll feel great about seeing the farm-to-table process come full circle.

What MUST Be Organic? The Clean Fifteen and the Dirty Dozen

We’ve all been there. You’re out to eat with family or friends trying to remember which foods you shouldn’t eat unless they’re organic. Fortunately, the Environmental Working Group (EWG) publishes a list of the worst offenders (Dirty Dozen) every year as well as a list of foods that are the least contaminated (Clean Fifteen). It’s important to remember that these lists focus on pesticide contamination and not on genetic engineering. To fully avoid GMOs, it’s necessary to choose organic.

Here is the EWG’s list for the fruits and veggies that you MUST buy organic as they are the most likely to be contaminated with harmful pesticides. 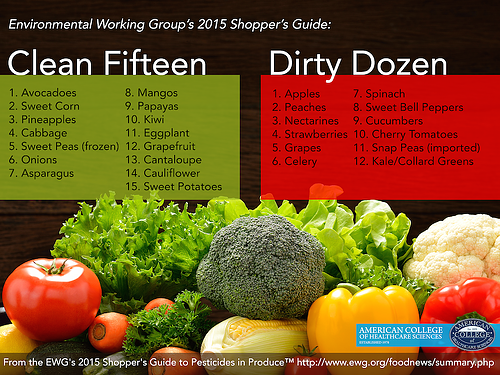 While I suggest choosing organic whenever possible, that little green USDA seal is not always available. Here are fifteen fruits and veggies that are least likely to have pesticides on them.

I’m greatly concerned about the direction our culture is heading in terms of how we produce the food that will feed our children. As a mum, grandmum, and holistic health advocate, I personally believe encouraging organic farming practices can make this earth a better, healthier place. Plus… don’t you agree that organic food tastes better anyway! ; )

I’d love to hear your favorite organic recipes in the comments below. 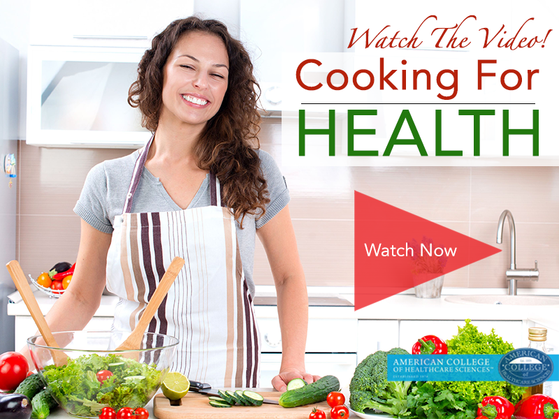 Disclosure of Material Connection: I am the President and Founder of American College of Healthcare Sciences, the Institution that publishes this blog. However, all opinions are my own. This blog may contain affiliate links. I am disclosing this in accordance with the Federal Trade Commission’s 16 CFR, Part 255: “Guides Concerning the Use of Endorsements and Testimonials in Advertising.”

[4] Like many influential writers and speakers, Pollan's ideas have sparked a lot of conversation and even some heated debate. It's important to acknowledge that reports and statistics and the like are open to interpretation. As an example, here is a well-written blog by Dr. Steve Savage that more or less refutes Pollan's point of view. Ultimately, we all have to decide for ourselves what we believe and what is right for our bodies. So, I have included this article for those of you who are interesting in reading an alternate point of view: http://appliedmythology.blogspot.com/2014/04/do-you-really-need-to-be-afraid-to-eat.html

[5] It may be helpful here to note that a pesticide can be defined as any substance used to repel, control, or kill any unwanted organism. A pesticide can be an insecticide, an herbicide, or a fungicide.