Meet Griffin – or Griffy as we fondly call him. Rescued from China February 22nd, I wasn’t sure what condition he would be in or even if he’d survive the journey, but Griff did just that. He was a very badly neglected breeding dog and once he was finished being a profit machine he was abandoned in a kill shelter.  An amazing rescue group managed to pull him out and get him on a plane and the day after he landed I brought him home.  His age is a mystery due to the major deterioration of his teeth but the vet is estimating him to be seven. 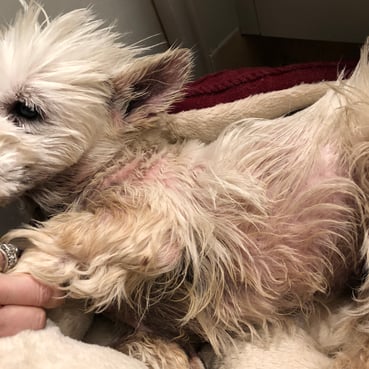 I live in Portland so once I’d made it to Seattle (I’ll write about this at another time but my window was shot out on the I-5 freeway and I got stuck in a winter blizzard in some weird back road in my feeble attempt to avoid I-5 at rush hour) I rushed; at 5 miles an hour to his side.

Quite honestly, if I didn’t see his condition up close and actually smell and feel the heat of his infected skin or the frailty of his body I wouldn’t believe any creature could survive such an existence or that journey. He’s had the once-over by a vet, but before any major medical diagnosis can be made he has to get free of his yeast infection growing over every part of his poor body.  As I held him my brain was going from, what am I doing to and how do I even begin to help him, so I decided to simplify it all and go back to my roots.

A Crash Course in Botanical Healing

Drawing from a rich heritage of expert herbal healing practices, I considered what remedies would help my poor sweet pup.

On the ride home I texted the office and had them grab the following for me so I was ready to help him when we arrived back to Portland.  I’m not an aromatherapist but growing up with Dorene Petersen as my mum I thought of the essential oils (EO's) I personally knew had anti-fungal properties.  The following is what my exhausted memory threw out as possible options. 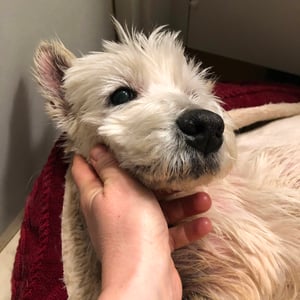 Once we got home after our Gilligan’s Island length trip to Seattle (6 hours turned into 14) I made Griffin a mix of oils.

I added 2 drops of each EO to the organic coconut oil that I had in the pantry, which I selected as it’s a natural anti-fungal.  I used about a cup to make sure the oils wouldn’t irritate Griff’s skin further.  I figured it had to be better than nothing and I didn’t have the heart to spray him with this alcohol based spray the Chinese vets sent him with so went to work on him. I smeared the oil all over his body.  He stunk!  He smelled like bread and vinegar and dirty feet.  The coconut thankfully masked that a little but then it was like the smell broke free and my bathroom was filled with a smell that made me feel sick.  He wanted a kiss but out of self preservation I patted his head, told him he was safe and a good boy and put him to bed with some water that I added a few capfuls of Apple Cider vinegar to (about 2 capfuls  in about 4 cups of water) to help balance his internal flora and give him a fighting chance of beating the odds from the inside. I saved the lavender hydrosol and calendula flowers for a spray for future use.

He fussed for a bit, but understandably so, as he’s in pain from pretty significant dental extractions and was starved to the point of eating whatever he could find to fill his belly. After a nutritious meal of brown rice, organic veggies (cooked mushy) and some small amount of white chicken meat, he slept all night.

The next morning I woke up; snuck into the bathroom  and was delighted to find him looking better and in good spirits. From the photos I know you are probably thinking how can that be better, but it is.  I’ll adjust his skin blend and slowly balance his gut flora over time and with some continued care he may recover.  I am prepared for the reality that the cysts all over his body are not cysts but 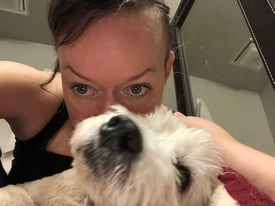 cancers or some other awful ailment but for now I’ll keep up his oil rubs, food and once he’s free of the yeast infection and god knows what else I’ll look at the other major medical issues he has.

If anyone has any tried and true suggestions about EO blends, dietary suggestions or just wants to give me some pointers I’d love to hear them.

I’ll post the EO blends that work or seem to help and I’ll keep you posted on Griff’s progress.

We are celebrating Herb Day 2019, May 4th this year at the college campus and will be focusing on holistic health for dogs (or other pets) and explore CBD and essential oils for preventative support.

Let us know if you’d want to see that live-streamed and I’ll see what we can do to make that happen. Definitely let me know if you'd like to join the celebration and meet Griff. 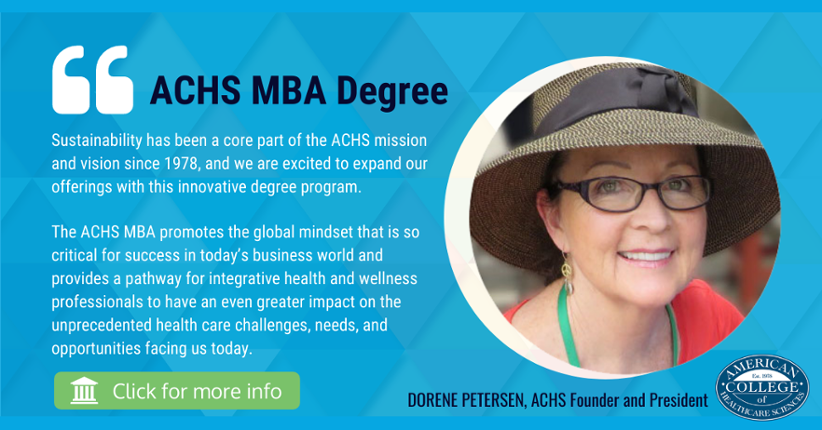 Founded in 1978, ACHS.edu is a Portland, Ore.-based, accredited college offering online, on-campus, and study abroad integrative health education. With undergraduate and graduate degrees, diplomas, certificates, and continuing education units in integrative health, ACHS makes holistic health and wellness education accessible to a diverse community, including healthcare professionals, military students, stay-at-home parents, and lifelong learners. Specializations include aromatherapy, herbal medicine, holistic nutrition, and wellness. ACHS is a Certified B Corporation® and was named two of 100 Best Green Workplaces in Oregon 2017 by Oregon Business magazine. ACHS is also accredited by the Distance Education Accrediting Commission (DEAC), which is recognized by the U.S. Department of Education and by the Council for Higher Education Accreditation (CHEA). In response to our commitment to service members, veterans and military spouses, ACHS has been designated as one of the top 16% of military-friendly institutions in the U.S. for nine years in a row. For more information: https://achs.edu/our-military-students Visit achs.edu.

Kate first began working with the College in 1992, assisting with Student Services. She returned to the College in 2002 after living in Japan. Kate enjoys working with staff and students, and draws upon her extensive online marketing experience to ensure that ACHS marketing efforts do not reflect in increased expenses for the college or students. Kate also works closely with the all military branches to elevate our servicemembers' and their spouses' learning experience with ACHS. Kate has an avid interest in natural health and gardening, and is a passionate New Zealand All Blacks Rugby fan. She uses natural remedies in her daily life for herself, her daughter, and her two West Highland terrier dogs, Zoey and Rigby.