ACHS's Official Comment to the FDA on the Term "Natural" 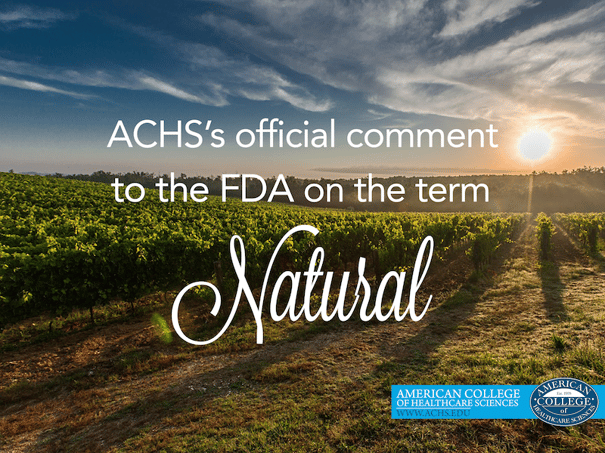 Recently, the Food and Drug Administration opened a public comment period to determine what the term "natural" should mean on food labels. You can read more about what the FDA was looking for in our blog post here. As a holistic health college with programs in holistic nutrition, this is a topic near and dear to our hearts, and we were very eager to share our thoughts with the FDA, and of course, you!

Below is our official statement, submitted by ACHS President and Founder Dorene Petersen, on how ACHS believes the term "natural" should be defined (comment tracking number 1k0-8pjs-rjhv). You can read how other people are commenting in the docket here.

Notification of Request for Comments: Use of the Term “Natural” in the Labeling of Human Food Products. Docket No. FDA-2014-N-1207.

American College of Healthcare Sciences (ACHS) commends the FDA for opening a public comment period over the definition of the term “natural” on food product labels. Food labeling is an important topic in promoting transparency and honesty within the food industry, and we appreciate the opportunity to submit a comment to help better define this ambiguous term.

ACHS was founded in 1978 with the mission to learn well, live well, and educate others. As a holistic health college that offers programs in nutrition, we care deeply about the ingredients in food, as well as the processes by which they’re produced, packaged, and handled on their way onto our table. Therefore, ACHS encourages the FDA to officially define, through rulemaking, the term “natural.”

Public confusion has surrounded the term “natural” for some time, resulting in numerous false-advertising class action lawsuits. Without an official definition, U.S. courts are independently left to determine the legitimacy of these claims. However, lawsuits of this nature would decrease and consumer literacy would increase with a clear definition of “natural.”

Unfortunately, it seems many consumers associate, confuse, or compare the term “natural” with the term “organic,” though they are not synonymous. It’s easy to understand why. Our information channels are full of vague, conflicting, and plainly incorrect information.

Consider, for example, the definition of the term “natural” and the USDA definition of “organic.” The Oxford American Dictionary defines “natural” as, “Existing in or obtained from nature; not made or caused by people.” Based on this accepted definition, it’s reasonable one might assume food products labeled “natural” would be free of pesticides or genetically modified and/or irradiated material—in addition to being free of artificial ingredients—as “pesticides,” “genetically modified,” and “irradiated” are excluded from the USDA’s definition of “organic.” These processes fall extensively outside the scope of not made or caused by people, and therefore should not be allowed in foods labeled “natural.”

Certainly, there is nuance to defining this term. Taken to the extreme, it can be said that the definition of “natural” means absolutely no processing or manipulation by humans. In our opinion, however, food products that go through processes such as drying, salting, and marinating could be labeled as “natural” as long as there are no petrochemicals, synthetic substances, or genetic modifications used in the processes.

ACHS strongly urges the FDA to exclude food products made with harmful pesticides or genetic modification from its official definition of “natural.” Putting aside the fact that pesticide exposure has been linked to cancer as well as other adverse effects on the eyes, skin, nervous system, and endocrine system,1 they are doing great harm to our environment—polluting our soil, water, and air. It is a great irony that products labeled “natural” could contain chemicals that are actively killing our natural world.

Additionally, genetic modification is another process that should be excluded from the official definition of “natural.” While it seems obvious that modification of animal or plant genes by humans is unnatural (this is a strong public sentiment), there is simply not enough evidence to demonstrate that genetically modified foods are safe for human consumption.

It should also be considered that certain applications of genetic modification are designed to make crops more resistant to pesticides, allowing them to sustain larger than normal doses of harmful chemicals that remain in the food. The concern for the effect of genetically modified organisms on human health is so pervasive that the state of Vermont signed a GMO labeling bill in 2014.2

While ACHS believes these two processes should be excluded from food products entirely, we strongly encourage the FDA to exclude them from the official definition of the term “natural.”

In closing, ACHS suggests that the FDA stay as near to the dictionary definition of “natural” as possible when creating an official definition: a food product sourced from nature, free from synthetic additives, genetic modification, irradiation, and other processes that the public would consider artificial. Transparency on food labels is of paramount importance to maintaining the health and safety of the public, and we hope the FDA’s official definition of the term “natural” will be as transparent as possible. 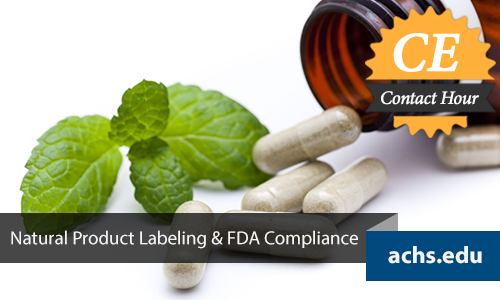 ACHS's mission is to foster competence, professionalism and cooperation in holistic healthcare, and preserve and share knowledge in natural medicine. This includes sharing helpful, informative, holistic healthcare articles on the ACHS Health and Wellness Blog.